Congratulations to British teenager Emma Raducanu, reached the US Open final as her meteoric rise to fame continued with a stunning semi-final victory over Greek 17th seed Maria Sakkari in New York.

Londoner Raducanu, who was born in Toronto, Canada to a Romanian father and Chinese mother, extended her dream run with a 6-1 6-4 victory in which her dominance on court defied belief.

She is the first qualifier, which means she has to play pre-match games in order to qualify to enter the tournament, to reach a Grand Slam final and will play another teenager Leylah Fernandez of migrant heritage on Saturday.

Leylah’s father is Ecuadorian and her mother is Filipino Canadian. 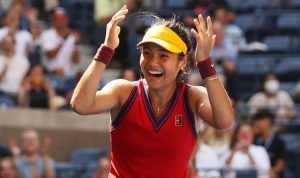 In an interview with Jeremy Vine today on BBC Radio 2, the former British Tennis player Andrew Castle commented that there was something about both of the finalist’s ordinary migrant heritage that seemed to give them that extra drive and ambition to succeed against all the odds.

Raducanu is the first British woman in a major singles final in 44 years.

Watched on by Virginia Wade – the last woman to achieve that feat at Wimbledon in 1977 – Raducanu produced another fearless and ruthless victory that stunned those watching on Arthur Ashe Stadium.

After confidently swatting away a volley on her first match point, Raducanu immediately dropped her racquet on the court and covered her mouth with both hands.

Quickly she broke out into a beaming smile before lapping up the acclaim of a rapturous crowd on the world’s biggest tennis court.

Prior to her amazing run to the Wimbledon last 16 earlier this summer, Raducanu was ranked just 336th in the world and was unknown outside the tennis world.

This win puts her on the verge of the top 30 after already being assured of becoming the British women’s number one by reaching the last four at Flushing Meadows.

It also gives the London teenager – who also passed her A Levels this summer – at shot at one of tennis’ most prestigious titles when she faces Canadian 19-year-old world number 73 Fernandez at 21:00 BST on Saturday. Source: BBC Sport.

We in the UK will be cheering you and wishing you all the best for the final tomorrow Emma! But whoever takes the title, it will be a victory for all hardworking dedicated migrants!

Emma, who had previously booked a flight home for the end of the qualifiers, could become the highest paid British sportswoman of all time according to commentators, but it is still early days. There is no doubt that her earnings potential and profile have skyrocketed into the millions since she splashed onto our screens this summer at Wimbledon.

She will need to keep her feet on the ground and concentrate on her game rather than celebrity appearances, as well as very good financial advice. Too many young stars who become so-called ‘instant millionaires’ end up broke a few years later.

Watch this free on demand training

Millionaires and millionaire habits have been studied and documented at academic levels for the last hundred years. Bestselling books, like The Science of Getting Rich and Thinks and Grow Rich, were written almost a century ago. I have also published my own book on how people get wealthy and how some lose it all – Yes Money Can Buy You Happiness.

We know exactly what the millionaire and billionaire habits and traits are, as success leaves tracks. All you have to do is follow their tracks to become wealthy and financially free!

If you would like to learn more about investing and managing your money, become a professional property investor, or would like to be financially free without working any harder, watch this free on demand training.

I will give a special free gift which can help you to immediately transform your finances when you attend the online training.

Click on this link to watch the free training now https://bit.ly/3wLWqx2

Please note our privacy notice is available for you to view any time upon request.

As you are a valued connection of mine I’d like you to know you can unsubscribe any time from receiving further content from me. Although I rather hope you won’t!